The blelb Team also specializes in assignments which require advanced knowledge in design and natural science.

For the University of Applied Sciences we invented and produced forty pictures with the working title «Moiré». The example shows the interaction of two identical layers with a resulting lightness illusion. More examples can be seen in our publication «Moiré» and in a permanent exhibition in the building FH-Nord at the Steinackerstrasse 5 in Windisch. 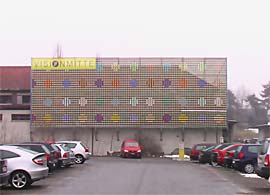 For the foundation «Vision Mitte» we installed a giant poster as a metaphor for cultural diversity and transparency in conjunction with the growing campus of the University of Applied Sciences of Northwestern Switzerland at Brugg-Windisch. 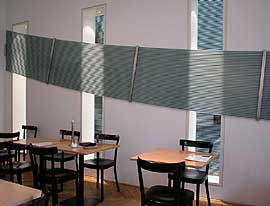 For the Gewerbemuseum Winterthur we set up a Moiré-installation which visualizes the movements of passers-by. 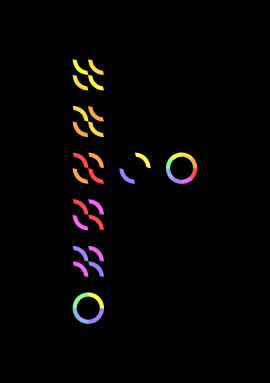 For the architect and the owner of a new five-storey apartment house in Zurich, we developed a design concept. Our goal was to give a unique appearance to the otherwise very similar looking floors. The pictures on each floor (2.6 x 2.6m) can be seen by the visitor from the moving elevator. The design of each picture follows strict geometrical rules based on the colour circle in the entrance hall on the third floor. 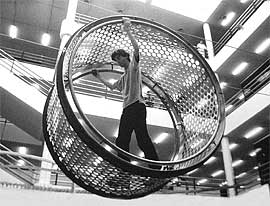 For the Technorama at Winterthur we invented a rolling bridge. The design was realized together with Mischa Badertscher. 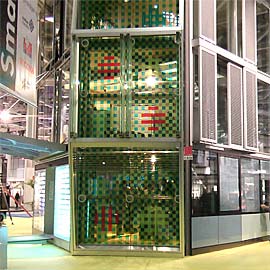 For the Smart PowerHouse at the Swiss Bau 2005 we designed a glass facade over three floors which optimizes the incoming light and redefines the architectural relationship between the inside and the outside of the building. 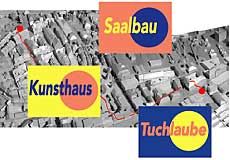 For the city of Aarau we invented an ecologically sound and cost-effective orientation system for out-of-town pedestrians which guides them to various cultural institutions.

Some of our works deal with the visualisation of mathematical mappings. The example shows an extract of such a visualized formula with unpredictable geometrical structures. More pictures can be seen in a permanent exhibition in the renovated building of the Gewerbeschule Brugg. 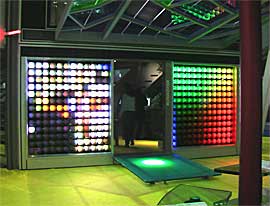 For the Smart PowerHouse at the Swiss Bau 2005, we created a software application which transforms the signals coming from two webcams into rasterized images which are finally displayed on LED-panels at the entrance. Attaching these two «eyes» makes the façade part of the media-event and an interface between the incoming visitors and the building. 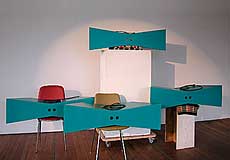 For the Expo 02 we developed and built a stereographic viewer for large-format slides.

For the University of Applied Sciences, we developed and produced 22 pictorial experiments. This collection of pictures entitled «Blue.Yellow.Red.» is presented to the public as a permanent installation in the patio of the renovated main building at Brugg-Windisch.

The image on the left shows two circles of the same shades of red. Use a magnifying glass to convince yourself that both reds are of the same tone.

For the pavilion «Seeing» in the park of the Archeological Museum Brahmsche-Kalkriese we suggested, designed and installed a giant eye.